In 2013, the Phoenix Union High School District implemented participatory budgeting in one school as a pilot project. By 2016, it became a district-wide program (first in the U.S.). By 2019, the program expanded to 34 schools in four cities: Phoenix, Chandler, Tucson and Mesa. There is variation in design and implementation, as schools are encouraged to innovate and try different models.

Photo by Jeswin Thomas on Unsplash

Beginning in one school, the Bioscience High School, in the 2013 – 2014 academic year the process began to take off with the first school district embracing the approach. One of the defining features has been the incremental approach to adoption.

Building on the first 5 schools in Phoenix Union High School District, over subsequent years the project has grown into 10, then 15 and is now in over 30 schools. Throughout remains a strong focus on student voice, the mirroring of the actual ‘adult’ voting process and the building of cross-sector collaborative partnerships. Most projects focus on one off capital spending on issues such as playground improvements, water and shade, the provision of sports or other extracurricular activity or a focus on environmental sustainability.

The Arizona SPB process aims to develop student leadership, amplify student voices, and build respectful and inclusive relationships between students, teachers, and administrators. Since the initial pilot the model has inspired other schools to follow suit in adopting school based participatory budgeting. These combined processes now total over 50,000 students engaged across Arizona State:

The overall concept uses a ‘circles of participation’ approach. That sees participation happening in concentric circles, with the initial (outer layer) consisting of Observe, Deliberate and Vote. The next level of participation adds Determine and Create, with the final full process adding Present, Facilitate and Organise.

School Participatory Budgeting (SPB) in Arizona, expanded by the leadership role of the Center for the Future of Arizona (CFA), educates students about citizen and democratic engagement and supports teachers with training and materials across a year long process. Students “learn democracy by doing” through a process of participating in PB steering committees on campus, developing proposals and voting to fund improvement projects that build stronger school communities.

Through outreach and communications work new schools volunteer to join the programme. Budgets vary across schools from between $2,000 and $20,000. Students lead a five-step process with the support of their teachers and the community.

In doing so, students are empowered to act as community problem-solvers and to cultivate the skills and attitudes they need for lifelong active citizenship. The School PB process is typically organized in five steps:

Student leaders and their teams work together on proposals from initial design to developing project budgets towards the eventual funding of the winning school improvement project. Pupils who support specific proposals are encouraged to advocate for them and campaign to garner support for those ideas.

Research indicates that students who engage in civics curricular and extracurricular activities tend to score better than other students in civic duty, community involvement, political attentiveness, political efficacy, and other indicators of civic engagement. At the same time, research findings point out that people with disabilities have low levels of civic engagement, and that a combination of encouragement, support, and opportunities to participate can make a difference in their future political participation. For this reason, SPB in Arizona aims to promote inclusivity in all phases of the process.

Pupils participate initially through the establishment of school PB committees. Inspired by the processes that have taken place in cities such as Chicago and New York, and closely modelling the original processes of Porto Alegre these student committees works with the school leadership to propose, receive and improve projects, engage with other students to promote participation and provide oversight, thereby ensuring the process was fair and transparent.

Projects are often proposed during social science classes, occasionally based on school walk rounds, before being appraised based on feasibility, impact, budget, timeline line to implement, and adherence to school regulations.

Students share the final project proposals within their school using posters, presentations, assemblies, video ads, on social media, or in their school newspaper. As a way to improve inclusivity In some cases there were visual ballots produced to enable pupils who might have difficulties reading ballot proposals, and even support offered by special need educational assistants to complete ballot forms.

In some schools pupils also had to prepare presentations to authorising (fund holding) bodies to confirm they had considered the budget implications thoroughly, even including cost estimates from up to three potential suppliers,

The role of the Center for the Future of Arizona is important in supporting teachers through the process to enable the project to be youth led. Engagement with the education boards also enable projects that might emerge from one school, such as the provision of shade in playgrounds, to be picked up and replicated across other schools, thus amplifying the impact of the project on wider mainstream school budgets.

Participatory Budgeting in schools in Arizona lives at the intersection of youth engagement and school connectedness. The process prepares students for active civic life in adulthood:

On average there was an 84% voter turnout rate among the five Arizona high schools that first participated in the project.

Dr Chad Geston, Superintendent of the Phoenix Union High School District commented:  “This initiative is helping us to create an environment that nurtures leadership in our students, promotes civic engagement and builds community throughout every school within our district.”

Alongside the budget aspect through the drive to voter registration over 5000 young people have been added to the Arizona electoral roll. Future evaluations will look at how the process has impacted on voting rates of young people and academic attainment. But immediate feedback from pupils is encouraging, with new aspirations to run for public office or play their part as active citizens in other ways, such as working within public services, and generally be more civic minded and willing to make a difference within their community.

At the beginning of the project there can be scepticism on both sides about whether the process is meaningful. Pupils may be cynical that the process is not real and that they will be entrusted with deciding on school finances.

On the other side some teachers don’t believe pupils will make wise choices, or make self orientated and short sighted proposals such as ‘pizza parties’. That attitude often changes when teachers see how seriously the young people take the process and their ability to develop innovative ideas, leading to increased mutual respect and regard

In 2019/2020, even with the impact of Covid19 around two thirds of schools had completed the voting phase, with over 27,000 pupils participating before school closures. 8 schools had not completed the process, but hope to pick up or restart the program when schools recommence.

Starting in 2013 by now the Phoenix PB Project has become an Arizona Schools PB Project. From one school in Phoenix in 2013 the project grew to 5 schools in 2016 and eventually it has expanded to 34 schools in 4 cities of Arizona (Phoenix, Chandler, Tucson and Mesa) with more cities likely to join in Fall 2020. Moreover, the project has also expanded to several middle schools (not only high schools). In 2020 some elementary schools are expected to join.
Those running the project report pupils developing a strong sense of agency and empowerment through their participation, which will inform how they participate as citizens for many years ahead. Whilst the Covid19 pandemic has impacted on the process this year the organisers believe this only makes it more important to continue to rethink how education is done. School leadership programmes encourage pupils to aspire to succeed, to push the boundaries of what they feel they can achieve and that will potentially impact in a positive manner across their future working lives.
As Arizona School participatory budgeting has many models, each with unique features, it is difficult to complete a template using one specific project in one school. Different school districts and schools are experimenting with different models of doing School PB. There are different designs, from the way the steering committee is selected, the role of teachers in the process, the connections into the curriculum, the deliberative process and the final vote.
For instance, some schools have been experimenting with the steering committee being a single class (e.g. social studies, language), with interesting results. Other schools have been experimenting with ‘stratified random selection’ of steering committee members to represent the demographics of the school, or the inclusion of teachers, parents and community members in the final vote.
One middle school is focussed on doing an inclusive school PB, and that school innovated a primary (short listing) vote, thereby engaging all students in two moments of deliberation and decision-making.
In another example, after the primary (first round voting) to select the top 5 proposals to go to the final ballot, that school also included parents, family and community members in the final vote. All students in the school can deliberate at least twice (before primary and final vote) on the pros and cons of the projects in their social studies classes. There was also an overrepresentation of special educational need students in the steering committee.
Building a community of practise means different schools have been able to learn from each other and teachers have been imaginative in innovating new approaches.
Regarding the vote, in Arizona’s school PB they use the real machines that are used in general elections and additionally schools combine voting in PB with encouraging voter registrations, so that students can go on to exercise their vote in municipal, state and federal elections.

Schools provide the budget and have responsibility for implementing the projects, but work closely with school boards in doing this.

Support for the project has been made possible by a grant in 2017 of $110,000 by Phoenix IDA, a non profit fund, in partnership with Arizona Community Foundation (ACF) to the Center for the Future of Arizona.

Further support and engagement is provided by the USA national Participatory Budgeting Project, which is using the learning from Phoenix to encourage other places in the USA to adopt similar approaches.

From 2019 a new $50,000 investment from the Arizona Developmental Disabilities Planning Council was awarded for piloting the first-ever school-based inclusive Participatory Budgeting process for students with disabilities. This seeks to generate meaningful impact for the students directly engaged, and develop a base of knowledge to be shared more widely throughout the field, both state-wide and nationally, with potential for even greater scale and impact for the long-term. This grant was renewed in 2020 in order to further develop and refine this inclusive SPB model.

Short story in Time Magazine about the first School PB project in Phoenix (2013-2014):

Video from 2016 on the first district process with 5 schools: https://www.arizonafuture.org/participatory-budgeting/arizona/

Teachers blog from 2018 describing what it was like to be involved: https://aheadoftheheard.org/money-talks-empowering-students-to-drive-their-schools-budget/

Report from ‘Centre for the future of Arizona’ of the expansion of the project (2019):
https://www.arizonafuture.org/news/story/participatory-budgeting-kickoff.html

Report of funding to underpin external support for the project:
https://www.arizonafuture.org/news/news-releases/center-for-the-future-of-arizona-awarded-110000-to-expand-civic-engagement-initiative-across-all-schools-in-phoenix-union-high-school-district.html

Video interview on on the Arizona process (2020): https://azpbs.org/horizon/2020/03/students-vote-to-decide-how-to-spend-school-district-funds/

Resources developed to promote PB in schools by the Participatory Budgeting Project available at: https://www.participatorybudgeting.org/pb-in-schools/ 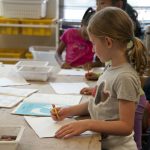