Glasgow City Council launched a new pilot scheme across four areas in Glasgow, with each area receiving more than £200,000 to be allocated to community projects. The aim was to let local communities have their say in where the money coming into their local area was spent.

SWAMP Community Development Trust worked with a selected youth led citizen panel in Greater Pollok to facilitate this PB process. Their facilitative work included; assisting the panel to create web based TV programmes to promote PB, helping with the preparation of application forms and guidance as well as administering receipt of completed applications; and helping to develop the use of the Young Scot online voting tool for the “Big Night In” Event in April 2019.

Initially, a youth led citizen panel was chosen in September 2018. SWAMP Community Development Trust then worked with the citizen panel to develop the participatory budgeting process including preparing application forms/guidance; ensuring the voluntary Citizen Panel received all applications and informing successful applicants of their opportunity to pitch their idea at the main PB “Big Night In’ Event on 18th April 2019 at local cinema complex Cineworld Silverburn . The event was broadcasted live by PBTV to the whole community from this facility.

A group of young people formed a citizen’s panel (September 2018) with the support of SWAMP Community Development Trust, to develop the process for the allocation of authority funds. The citizens panel were formed via recruitment evenings and pizza was provided, which proved a useful incentive for attracting interest. SWAMP already knew some existing young community groups within the Pollok area and contacted them informing them of PB and the amount of real funding involved. They did the same with local schools. They started with 50 young people who took an interest and showed up to initial meetings. This number quickly reduced to 20 naturally without continued incentives (food), those that remained were committed to being involved in helping decide how £200,000 funding should be spent within their community.

A Facebook Page was created in February 2019 to promote the process via a series of videos prepared by the Youth Citizens Panel on PBTV. The panel used this social media platform to; inform young people on the purpose of the PB process in Pollok and how they could participate in the process. The videos encouraged young people to apply for funding, directed them to application resources and reminded them of deadlines for application submission. Several videos also prompted young people to attend and participate at the “Big Night In” Event. SWAMP provided their contact information on every post and regularly updated the Facebook page to keep the Greater Pollok Community engaged.

The citizen panel screened applications submitted before 18th March 2019 and successful applicants were informed on 1st April. These applicants then presented their ideas for projects at a “Big Night In” PB event held at the Cineworld Silverburn on the evening of the 18th April 2019.

SWAMP facilitated the event in partnership with Community Choices Scotland, Glasgow City Council and PB Scotland, and the event was broadcasted live by PBTV to the whole community (live stream links posted on Facebook page before event). The event was ticketed, and SWAMP ensured young people could add their names to guestlist online prior to the event via a Facebook event page.

At the event, all young people aged between 8-25 were eligible to vote using their unique Young Scot Card Number (Young Scot card is a discount ID card

provided free of charge to everyone aged 11-26 living in Scotland). Temporary cards were provided to any person within the age range of 8-25 who did not have a Young Scot Card.

Online voting undertaken at the event and at home via the young scot voting link; https://voting.youngscot.org/Election/SelectConstituencyGroup/pbtv . The highest number of votes recorded were rewarded the funding requested on their application (funding available per project was capped to a maximum of £10,000).

- Watching the event through PB TV and voting online

In evaluating the process, it was a great way to get young people in the area interested in improving the place where they live.

Young people had a real sense of pride and achievement when they saw their video on the big screen in the cinema in front of their friends and local community. It was a really big thing for children to be involved in. Before now, most children would have only been involved in working with theoretical budgets that never amounted to anything and in reaction the children prepared big ideas. This was an opportunity to decide on how real money would be spent and so the ideas reflected that. They were brilliant ideas that would make real change in the community. For example, one of the winners voted for included the Glasgow Disability Alliance whose idea was simply to create more spaces in public areas for children with disabilities to improve access and reduce exclusion. It provided validation that young people can make successful decisions on how a budget is spent in their community.

From this PBTV experience, some of the young people from the citizen panel started up the Greater Pollok Youth Forum. The PB process encouraged these young people to continue the conversation of being involved in issues within their community. The experience made them believe their ideas could be heard if they were actively involved in the process. 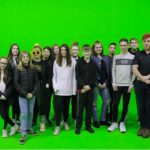