The project aims to encourage the local youth to become more involved in “decision-making on issues that directly affect them”. The purpose is to promote youth participation with actions within the wider municipal program to promote citizen participation, the so-called “Peligros Sounds”. The project’s goal is that young people should acquire values such as active citizenship, cooperation and solidarity. At the same time, the youth would be able to create networks of participation and learn how this participation could improve local democratic life—in contact with politicians and technical staff.

This program is organized by the Department of Participation and Youth of the Peligros town council. It was designed and developed with the support of the youth of the town, mainly with members of the municipal youth assembly, municipal youth associations and other young people who were not organized in any specific platform but were interested in municipal policies.

The politician in charge of participation is committed to giving the youth more influence in decision-making on issues that affect them. It is intended to strengthen a process of youth participation that connects with a municipal project to promote citizen participation ("Peligros Sounds"), making local young people one of the driving forces behind the project. The program seeks to achieve three major objectives:

Thus, the youth could have access to shared policy decision-making spaces that have to do with municipal development in general and youth-related policies in particular. If the youth of Peligros learn and build effective and efficient ways of co-managing public life, in the future they may be responsible for maintaining and implementing them.

This initiative is designed to foster youth participation in the development of the 2019 PB. This involves children in the 1st year at secondary school (age 12-13) and the youth of the municipality.

Each class made proposals, they then voted and 2 were selected. In addition, each class voted for two representatives to participate in the R'U'Talking2me? youth meeting that took place on Saturday 6 and Sunday 7 October 2018. At that meeting, they defended the proposals selected in their class. The topics of the proposals were related to municipal construction work, culture, festivals, youth, equality, education and the environment.

In the assembly, proposals coming from different sources were addressed discussed and prioritized. These included proposals from the group of secondary school representatives, those of municipal youth groups and associations, and those presented by non-organized young people. Several young people were elected to participate in the committee assessing the feasibility of the proposals.

Photograph of the General Youth Assembly

The Feasibility Committee, composed of politicians, technical staff and neighbors, selected some of the most popular proposals, in line with criteria relating to technical and economic aspects, and legal and social justice. These proposals was finally put to a vote of citizens of Peligros.

Some proposals relating to youth issues were approved through this process and were incorporated into the town’s general PB.

The council committed itself to implementing during 2019 the 10 proposals receiving most votes.

Main steps in the PB

The youth of Peligros have participated in different ways:

Part of the process was guided by those responsible for participation policies in Peligros and part of it was developed in conjunction with the youth. The youth became directly involved in the design, development and evaluation of the program. They did this by:

Many proposals made during the process were implemented, regardless of whether or not they received the most votes, as they were included in the plans of the municipal departments in charge of the respective policy areas.

This project continues with work that has been being carried out in the municipality since 2012. More than 60 proposals have already been implemented in the town. It represents an annual milestone in the process of bringing youth and the city council together in a more structured way. This project offers insights about participatory democracy in general and PBs in particular.

The main difficulty lies in organizing the logistics of a process that simultaneously involved more than 150 young people during some phases of the PB.

Development of the project was considered a complete success by both the organizers and the young participants. The youth of Peligros demand that this type of experience should take place periodically and should be extended in the coming years.

Over time, this campaign has increased the number of young people involved in the democratic process.

Full responsibility was assumed by the youth department of the Peligros town council.

Facebook page where the process has been documented: https://www.facebook.com/pg/RUTalking2me/posts

Other news stories have been included on the municipal website:

Information on the activity has been published in the municipal magazine "Peligros Suena", nº 65, October, see the following link: http://ayuntamientopeligros.es/ya-esta-disponible-el-numero-de-noviembre-de-la-revista-peligros-suena

What do you want your people to spend money on? R’U'Talking2me?: https://www.observatoriodelainfancia.es/participanda/presupuestos-participativos-rutalking2me/

Initiative: What do you want your town's money spent on? R'U'Talking2me? (video): https: // www.youtube.com/watch?v=9OGTX1V6xts 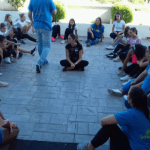 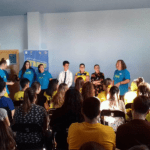 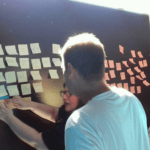 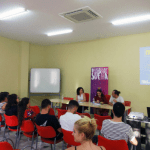