In 2017, the first edition of Participatory Budgets (PB) in Xàtiva was organized with significant individual and collective citizen participation. As a result of the evaluation of the process carried out in 2017, it was proposed that part of the 2018 PBs be allocated to a specific participation process for the youth in order to increase the impact of the project on the population as a whole and to improve the culture of citizen participation in the municipality.

The youth between 6 and 16 were able to decide how to spend a maximum of €10 000: €5000 euros for students in primary education and €5000 for students in secondary education. This part of the budget was destined either to investments or to the design of projects to promote citizen participation in the municipality.

The project aimed to train, design and implement PBs with the youth, at school centers and with the participation of teaching staff, in order to promote citizen participation for social improvement.

In order to transform the ideas of the youth into feasible projects, a 3-phase consultation process was proposed and carried out in all primary and secondary schools (public and subsidized) in the municipality:

This was the list of proposals for primary schools:

This was the list of proposals for secondary schools:

In primary, the winning proposal with 1091 out of 1765 votes was the Inclusive adventure park.

In secondary, the winning proposal with 944 out of 1330 votes was Young connection.

To implement the project, the municipality worked directly with school centers (8 primary and 3 secondary) as well as with the Municipal School Council. In addition, a Leading Education Group was created to coordinate with the local Department of Citizen Participation.

To disseminate the project, an official image was designed for use in different posters, roll-ups, videos, etc.

Participating students were able to involve themselves in the participatory process in different ways: preparation of proposals, decision-making selection of proposals (student representative of each center) and final voting (population from 6 to 16 years).

The proposal preparation phase was led by the teaching staff of the centers based on a toolkit prepared by the Xàtiva Department of Citizen Participation, while the decision-making sessions were led by the Department itself.

The polls were conducted in the educational centers themselves, where the city council provided ballot boxes.

The consensus that the project generated at political, technical and educational level facilitated its implementation and coordinated work between the town council, educational centers and the educational community (School Council). This increased the participation of the youth in the process.

No major obstacles were observed in its evolution.

The participation of youth must have its own space, with its own rules, languages and internal dynamics, in addition to the PB processes that are mainly centered on adults.

The technical, material and financial resources were provided by the Xàtiva town council itself. 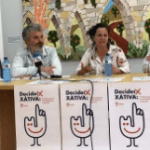