The Rubí town council, representing around 77 000 inhabitants, allocated two separate items to the town’s participatory budgets (PBs). Firstly, €250 000 were allocated for town improvements based on proposals made by people aged over 16 years and resident in Rubí. Secondly, €50 000 were allocated to proposals made by children aged between 8 and 16 years for improvements in their schools.

These proposals were formulated through a process of collective co-creation, in which Rubí’s Advisory Council of Children and Adolescents had a leading role, together with events that took place in public contexts and in classrooms.

In Rubí, the children’s PBs are conceived of as a project that runs parallel to the process for adults. It follows initiatives proposed a year earlier.

The general objectives of the PB are:

The process was structured in 4 phases, as follows:

Phase 1 CONSOLIDATION OF THE PROPOSAL (September-December 2019)

The project is organized by the Rubí town council and takes place in parallel with the PB process aimed to adults. It is jointly coordinated with the Urbanins team (http://www.urbanins.cat/).

Different technicians participated in each phase to guarantee the project evolved correctly. In this context, it is boys and girls aged between 8 and 16 years who formulated the proposals and helped to reach the whole educational community through their daily networks and relationships.

Different methodological activities (games) have been used to conduct the participatory process:

Activity 1. Knowledge gathering. First, the technicians made a series of presentations and were informed of the Council of Children and Adolescents’ expectations. This knowledge-gathering activity was carried out by using the cobweb game.

Activity 2. Technicians discussed the rights and obligations that youth have in Rubí and in the world. They formed groups and played together using UNICEF resources to make them aware of the main issues affecting them in a local and global context.

Activity 3. The Urbanins Consultant made a presentation about PB using games to foster the discussion.

To guarantee the traceability and transparency of the project, a platform was created (https://participa.rubi.cat/) to monitor methods, actions taken and the results of the process.

Proposals made by the Council of Children and Adolescents (financial allocation €50 000, VAT included):

The action consisted of filling some pedestrian crossings with colors and figures, while incorporating phrases proposed by this group. The Rubí Council of Children and Adolescents suggested that the 20 crossings to be painted should be those on routes to schools so that more young people could see them.

Supply and installation of benches:

The proposal is to install benches that make it easy for people to occupy them and communicate with each other (face-to-face and close to each other). The benches should be attractive and, if possible, be placed in areas close to vegetation. Products available on the market that fit this proposal are currently being analyzed.

A tender to purchase the benches will be made once the tender for the aforementioned action of painting the crossings has been implemented. The rest of the money up to €50 000 would be allocated to this project.

Young people generally participated in groups, especially dealing with children's budgets, since they worked collaboratively through the Rubí Council of Children and Adolescents and their schools.

The process was guided at all stages by the Rubí town council, with the help of the Urbanins team at schools.

The project's main virtue is to involve the youngest children (8 to 16 years old) in the PB process, which until now was a space reserved for adults. In this way, the role of children and adolescents in public decision-making processes has been extended, providing them with real tools for direct democracy. It also serves as an exercise in effective participation, since it makes a total of €50 000 available to participants to make their proposals come true.

Another positive aspect is that it unites the whole educational community beyond schools, and consolidates the dynamics of citizen involvement—especially of the youngest.

The process did not involve a general vote on proposals.

The Advisory Council of Children and Adolescents of Rubí, formally established in 2002, played a very important role in the process. The Council, formally created in 2002, The project's main virtue is to involve the youngest children (8 to 16 years old) in the participatory budgeting process, which until now was a reserved space for adults. In this way, the role of children and adolescents in public decision-making processes is expanded, providing them with real tools for direct democracy. It also serves as an exercise in effective participation, since it makes a total of 50,000 euros available to participants to make their proposals come true.

Another positive aspect is that it unites the whole educational community beyond schools, and consolidates the dynamics of citizen involvement, especially that of the youngest.

The process did not involve a general vote of proposals.

The Advisory Council of Children and Adolescents of Rubí (https://www.rubi.cat/es/temas/infancia/consejo-de-los-ninos-y-adolescentes/consejo-de-los-ninos-y-adolescentes) played a very important role in the process. The Council, formally created in 2002, is the body through which the children of Rubí can exercise their right to participate, express their ideas and thoughts, and propose and/or participate in specific actions to improve their town. It is made up of children aged between 10 and 14 years from the various public and subsidized primary and secondary schools in the city. In 2016, Unicef recognized Rubí with its seal as a Child Friendly City and this is largely due to the long, solid history of the Children's Council.

Coordinating the different participating agents (educational centers, municipal technicians, boys and girls, families and so on).

All responsibility for resources falls on the Rubí City Council, which allocates budget items to different proposals presented and, later, gives responsibility to the follow-up technical commission, which together with the children who have presented the proposal follow up on the projects implemented. 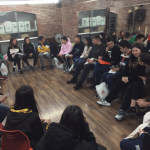 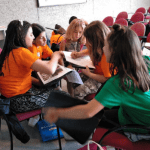 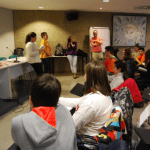 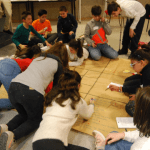 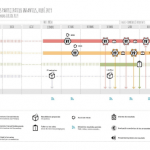 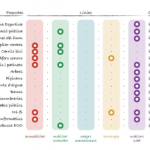