Schools and libraries from all over Poland applied for activities under the Young Citizen Programme – the task of students from project groups was to organize the event involving the local community into the life of their local government. They were supported under two thematic paths: “The office to be known inside out”, i.e. getting to know the functioning of any institution and opening its walls to the local residents and their needs; “focusing on the future” consisting in the meeting of  representatives of various groups (e.g. youth, seniors, athletes), during which they reflect on the vision of their area in 5, 10 and 15 years.

The main objective of the project was to promote work with the use of the educational project among students from Polish public schools. The working method into the group, focused on a specific local objective and structured, is perfectly suitable for lessons of Social Studies. It is a chance to learn through experience.

The idea related to this particular topic (opening of offices and future workshops) is to connect the school community with the local community. The activities took place mainly in small towns of up to 30 000 thousand inhabitants.

The project groups which applied for the programme had 5 months (half a school year) to plan and implement activities (two identical editions were held during one school year). These were various groups (schools, libraries, local NGOs). The organizers cooperated with primary schools, junior high schools, high schools, technical schools but also with kindergartens and local action groups.

The whole project started with the training of regional teachers - future tutors of student project groups. Teachers during the training received the necessary knowledge about working with the use of the project method and supporting students in learning by playing and experience. Teachers also received the publication which describes step-by-step possible activities and they could ask coordinators for support throughout the project.

The substantive support was provided to pupils - in total 22 workshops were held in schools which participated in the project during the summer term. Groups willing to participate in the workshops applied themselves by sending an e-mail. The programme of workshops was adjusted to the individual needs of students on the basis of previous interviews with their tutors and supervisors. During workshops young people had an opportunity to make a diagnosis of the nearest area and learn about the potential of its inhabitants and residents, know their own competences and interests, think about ways of gaining allies, plan ways of promotion as well as develop action schedules and work cards.

Students were supported under two thematic paths: “The office to be known inside out", i.e. getting to know the functioning of any institution and opening its walls to the local residents and their needs; "focusing on the future" consisting in the meeting of representatives of various groups (e.g. youth, seniors, athletes), during which they reflect on the vision of their area in 5, 10 and15 years. The third path was not directly related to the participation of young people.

A student project group consisting of 3 to 12 pupils, under the supervision of a teacher, applied for the project and chose the path which they wanted to participate in from the very beginning.

Pupils chose a specific topic for their local project and it should have been related to the description of the path they chose. Organisers wanted the pupils to have a lot of freedom in their actions, in choosing the topic, in looking for allies, but they also wanted students to remember about the quality criteria of a good educational project such as

Promotion was one of the activities in the project - it took the form of promotion on the school premises, but also the activity was to inform the local media, talk to decision-makers, hang out posters, and promote the project by the word of mouth. Social media were used sporadically, mainly to boast project effects.

The role of students was to choose the path (paths were pre-determined, but they had a wide and general thematic scope), to choose a specific topic of their actions and then to implement particular project stages – from diagnostic ones to project promotion, implementation to project summary. Students were encouraged to divide the tasks among themselves in a group basing on their skills and willingness.

Real activities in the city space - many pupils (often really young) were engaged in the project for the first time, the project going beyond the walls of their school. Most of the groups came from small towns where programmes implemented by external NGOs or institutions reach out much less frequently. Their activities had an impact on what was happening in the municipality – there were difficult questions to the authorities or discussion initiatives, when people analysed the future of the community without paying attention to the consent of the decision-makers.

The changeability of topics in each subsequent edition of the project is a positive value for younger students and teachers who do not lose their motivation to act because of reaching the limits of particular topics. Thanks to this, the whole family of teachers who have been participating in the activities for 6-7 years has been created around the Young Citizen project.

The main obstacles in the project were the lack of dedicated financial or material resources for project groups. The organizers provided substantive support (training, workshops, publication, helpdesk). However, with hundreds of schools participating in the project, it was not possible to secure even small grants for groups. On a pilot basis organizers organized a call of proposals for mini-grants in the amount of PLN 500, which was not as popular as you might assume.

The subject of actions (co-determination, functioning of the municipality government) was demanding for students and teachers, especially when there is little emphasis on practical dimensions in the core curriculum of social studies. The project required going out from school, establishing cooperation with decision-makers (with a certain level of dependence and often the conflict of interests).

The funds for the project implementation came from public funds of National Economy Bank Foundation.

Radlin is an exceptional town - this school term the last school located in this town joined the Young Citizen project. The Primary School no. 4 named after Gustaw Morcinek focused on getting to know functioning of the office. ‘During the programme, we held four meetings and several actions. The first meeting was devoted to getting to know each other better, adopting the rules and the code. We discussed objectives, chose the path and planned activities. Pupils at different age liked the meeting conducted with the use of workshop methods, the participants of the programme were children aged 10-12 years’ said Gabriela Kiełkowska, the group's tutor.

Children from the project group added: ‘We had meetings in the day care centre, they were fun because we worked in teams, with games and painting. They were different from lessons. The street poll was interesting, we asked about functioning of the office in the streets. We managed to sit in the place where the mayor and councillors normally sit. Ms. Kiełkowska was interviewed by the newspaper. We were at the session of the City Council, which was a bit long and about hospitals. Then the school deputy director bought us cookies, because we also asked the lady in a cake shop about investments in the city. We explored different places and departments in the City Hall for the second time. We were sitting again on the seats of the mayor and councillors because the mayor told us stories. And then we went to her office, it was great. But the most amazing thing was when the mayor dressed up and officiated a wedding to Ksenija and Błażej. We also had workshops with Mr. Michal from the CEO, Ms. Kiełkowska brought him. There were great portraits and fun. Later there was a field game in the forest and next to the school. We also organised a game about our city for parents and colleagues. During the fair the programme summary was presented. We showed and told what we did. And we finished the game in the forest because we liked it so much’.

The District Public Library in Kępno carried out future workshops. ‘We wanted to establish the dialogue with inhabitants of the town and ask them about their ideas for the development of Kępno - How do they see our city in the future, what do they lack here and what do they like, what would they would change and what would they leave unchanged? Idea of all inhabitants were an inspiration for us to continue our actions and the beginning of concepts for further projects which we have already been writing. We treated this project as a small local diagnosis of residents' needs and dreams. We will choose one of these ideas that will be submitted to the participatory budget as a concept of residents’ said the group's tutor- Ms. Natalia Wolko-Stempniewicz.

During workshops with Mr. Mateusz Konieczny we went outside and asked the inhabitants what they liked about Kępno and what they did not like, etc. I liked it very much because residents were eager to talk to us and we got a lot of interesting information. After this experience we decided to organize the final at the Market Square in Kępno and invite various groups of residents to comment on their vision of the city future. We invited kindergartens, schools and adults who willingly commented on this topic. We obtained a lot of information, which we will develop and publish on the library's website and provide to the City Council. 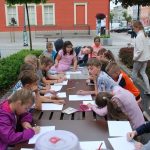