The entire YOUth Making It Happen process was youth led through a Youth Co-Design Panel, with the support of Derry City and Strabane District Local Authority as part of a Carnegie UK Trust Embedding Wellbeing in Northern Ireland programme.

The YOUth Making It Happen! Participatory Budgeting process involved young people aged 12-25 years having a direct say on how public resources are spent in their local areas to make things better and to make things happen! This gave younger people real power in decision-making.

Derry City & Strabane District Council opened a special PB fund of £20,000 for community projects and asked local young people for creative new ways to build a better future and to help transform local communities for the better. £2,500 was made available in each of the 8 Local Growth Areas to deliver the ideas generated by young people. Individual projects could apply for awards of up to £1,000. The Youth Co-Design Panel agreed 6 Themes which ideas could fall under: Arts and Culture, Community & Environment, Education & Skills, Equality and Inclusion, Safety, and Sport- Health & Wellbeing.

A Youth Co-Design Panel of 10 young people from across the Derry and Strabane District Council area planned and designed the YOUth Making it Happen process with support from officers from Derry City and Strabane District Council and Community Places. The young people on the panel ranged in age from 14 to 25 years and represented a number of different schools and youth organisations. Some of the participants were active in youth participation and were also members of the UNICEF Youth Advisory Panel and the Ministry of Youth.

The participants included 5 officers from Derry City and Strabane District Council including a Children and Young People’s co-ordinator, Strategic Projects Officer, Strategic Business Manager and Communication and Marketing officers who supported and facilitated the process. Community Places also provided tailored support to the process and facilitated each of the in-room and on-line planning and design workshops with the young people. At the outset of each workshop the participants took part in icebreakers to make sure that everyone felt at ease and confident to contribute their views and ideas. A safe and respectful space was created, and everyone was reminded that all ideas and views shared were valid. The Co-Design Panel were involved at every stage and took key decisions for example, on the theme of the PB process; how young people could get involved; the PB criteria; timescales; how resources would be allocated and how the process was promoted including the information available on the YMIH website.

Drawing on good practice from UNICEF – the young people participated via Informed Consent. An Information Sheet was prepared to outline the background to PB and YOUth Making It Happen (YMIH), why it was important, benefits of participating and how information would be used and shared. There were 10 workshops as part of the overall YMIH process between February 2020 and July 2021.  The first co-design workshop took place in-room in February 2020 with the young people deliberating and deciding on the PB themes, eligibility criteria to assess PB proposals, key stages and timeframes, and branding and marketing for the ‘YOUth Making It Happen’ PB process.  As the Covid-19 pandemic evolved the delivery of the project was impacted significantly and the decision was taken to pause the process. However, work was able to continue on the development of a dedicated YOUth Making It Happen web presence on the Grow Derry Strabane Community Planning website www.growderrystrabane.com/youthpb and an engaging promotional video which the Co-Design Panel contributed to.

The Youth Co-design Panel was reconvened in August 2020 and the young people reviewed decisions previously taken in light of the implications of COVID-19. It was agreed that the themes were still very relevant, and the group discussed and agreed a revised delivery schedule. The PB initiative was launched on 08 September 2020 and young people from across the council area were invited to submit a short on-line application followed by a second stage video submission of their ideas.

As further social distancing measures and school closures were announced amendments to the delivery schedule were required to ensure safe participation in the PB process. The Co-design Panel continued to meet via zoom workshops to plan and oversee implementation of the process and to make key decisions including verifying the criteria check process, agreeing the voting process and procedures, how the budget would be allocated across each Local Growth Area and the content of the Learning and Evaluation process.

The young people directly shared information about how to get involved through their own networks, with peers and via Instagram.

A representative from the Youth Co-Design Panel, James, had the opportunity to promote the process on a local radio station: The Mark Patterson Show, Radio Foyle (49 mins in).

Young people aged between 12- 25 years (in groups of a minimum of 2 people) were invited to submit ideas via a short on-line application form. The Youth Co-Design Panel decided than anyone aged between 12 and 15 would need an adult sponsor or mentor to support their involvement. It was also agreed that the PB resource (up to £1,000) could be used to match fund, enhance or secure a project idea.

There were five key stages:

The winning projects represented a range of themes including drama, culture and arts; improvements to green spaces and rivers; fitness, health and wellbeing, gifting and intergenerational activities; and education and skills.

The entire process was youth led and designed with the support of Council officers and advice from Community Places.

“We’ve really enjoyed working on the project, we got to choose the themes and were involved in every aspect of the decisions – this has made it more youth centred and the process much more open. The fact that so many people will be involved in making the final decision about who will be funded makes it much more democratic. We’re not making assumptions about what people want, we’re letting them choose and that’s really important.” Quote from the Co-Design Panel

The YMIH process received support from two Mayors (process ran over two different terms) who both recognised and acknowledged the role which the young people were playing in making a difference in their communities.

The participation of young people in the process was acknowledged and rewarded. All those who voted on-line and completed a short evaluation survey were entered into a competition to win a bicycle.  Members of the Co-Design Panel received Certificates of Participation to acknowledge the commitment, support and time they had given to the YMIH PB process.

The main obstacles faced by the project was the impact of COVID-19 which caused delays and required a number of changes to the time schedule.

“Because of Corona Virus we couldn’t go out to schools or into the community – it would have been good to do that peer-peer. Yet we still managed to get a good response.”

In two of the eight Local Growth Areas the minimum number of applications to enable a vote were not received, the Sperrin and Ballyarnet. The young people discussed and agreed an alternative process which ring-fenced resources for these two areas and ensured they were allocated to youth focused activities. The groups who had submitted their ideas to the YMIH PB process were able to make them happen through this separate process.

Young people on the co-design panel valued the opportunity to be genuinely involved at every stage of the decision-making process.

- Democratic because a lot of people will get to decide

- Young people get to vote and decide, so it is a fair process

“Opportunity for Young People to have their say and get involved in their community – doesn’t happen a lot, good to see it starting to happen, usually adult driven.” Youth Co-Design Panel Member

The young people felt that the political support from two Mayors (Mayor Brian Tierney and Mayor Graham Warke) and Senior Management Level including the Chief Executive of the Council was really important. This ensured that the project continued despite the setbacks and delays caused as a result of COVID-19. They felt that this underlined that engaging and empowering young people was valued and considered important. Representatives from the Co-Design Panel noted that they would like to see more opportunities for PB across the City and District so that PB becomes more embedded and part of how local democracy in practiced with younger people.

Mayor Graham Warke of Derry and Strabane District Council highlighting how inspirational the young people on the Youth Co-Design Panel were and acknowledging their participation.

“Youth led and projects delivered by young people. It shows young people across the Council area that there are people in the Council who want to listen to them, that want to involve them and help younger people to lead. I think that is very important especially during and after the Corona Virus – listening to young people and what they want.” Youth Co-Design Panel Member

At the Celebration Event which was held at Jon Clifford Park Basketball Court in July 2021, one of the successful projects, participants completed bingo evaluation forms.  85% of participants felt that they had been able to influence decisions making and would get involved in another PB process. 85% agreed that All of the projects would be good for the area and community, felt inspired about what they were seeing and hearing; liked voting for the project ideas; enjoyed the process and felt they had made a positive difference in their community.

Derry City and Strabane District Council was accountable for the resources to undertake the PB process which were secured from Carnegie UK Trust as part of an Embedding Wellbeing in Northern Ireland project.

Acknowledge the participation of the young people who take part. For example, the Co-Design Panel and representatives of each successful group each received a YMIH Certificate of Participation and a Pen Gift Set. The Mayor presented the Certificates to the young people at a Celebration Event held outdoors at one of the winning PB project ideas, Jon Clifford Park Basketball Court. 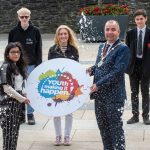 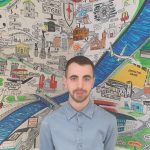