Garvagh Forest School is a collaboration of six primary schools centred around the ‘oxygen catchment area’ of Garvagh Forest – a 600-acre forest in Garvagh town. The project involved 120 young people from different backgrounds (7-9 years old) participating in an experiment in democracy and care in their local forest. This project was about the young people beginning to explore their ‘guardianship’ role with regards the shared space of the Forest and developing ideas around what would make the Forest an even more fun and space place for all, including the birds, animals, plants and trees.

The wider community from the ages of 7 years and up were then invited to vote on which ideas were the most viable to take forward. The ideas with the most votes were awarded money and got to bring their ideas to life.

The young people are part of Forest School for one year, connecting to the Forest for 4 weeks a term with the year’s journey co-designed & delivered with young people, teachers and volunteers. This was a pilot to explore at the end of their year at Forest School what it might look like to give young people greater responsibility in thinking about the Forest space and their actions and behaviours in it as part of the wider eco-system. The time was incredibly short in the lead up to the Voting Event as we received an unexpected gift of money which needed spent relatively quickly. We increased this pot through a 1-week crowdfunding process.

The project began in April with the Voting Event held in June 2019. They key steps from April – June were as follows:

1.Engaging with the principals, teachers and volunteers to give them a crash course in PB and ensure that they have understanding and confidence to explain it to the children.

2.Over May we had 5 sessions with the young people as part of their normal Forest School programme. All the sessions were in the forest with the children in their normal Tree Teams (of 6-8 kids).

-Session 1: Question & Walking Trail through the Forest beginning to explore when, how young people get a chance to make decisions in school around budgets.

-Session 2: Quick explanation of PB using objects: fishing net (to catch and look for ideas); sieve (to begin sorting out the Big Ideas – someone else’s responsibility and the Little Ideas – things we can do something about); Batman and Robin (to represent Big Ideas and Little Ideas); Picture Frame (how we communicate these ideas). These props were used through the process as a reminder of key steps.

-Session 3: Beginning to generate ideas and sorting them into Big Ideas and Little Ideas. For this we used big Tree Posters to hang the ideas on.

-Session 4: Choosing the idea the teams wished to go with by thinking about the criteria of: is the idea possible to deliver for £160; is it safe for people and the forest; do we have the authority to make it happen.

-Session 5 – Preparing for the Voting Day.

The Voting Day was held in June in the Forest. 18 teams were presenting their chosen idea. This was done in a picnic format with each team having a picnic blanket, objects/props to explain their idea and a summary poster. They also had a little ‘snack basket’ to keep them going! The voting was open to all the young people, teachers, volunteers, and parents. Each voter was given a page with the ideas listed and this was stamped once they had visited the team. This was to ensure, as much as possible, that the voters went around all the ideas. Once this was done, voters went to the polling station and were given 5 pasta shells as they had 5 votes to distribute across the project ideas. The polling station was ‘manned’ by 2 police officers and a civil servant from the Department for Communities. Once the voting had closed, there were burgers and hotdogs whilst the counting happened led by a Council officer and her team of counting officers including someone from the Education Authority. The results were announced then and there with big cheques presented donated by the local Credit Union. There were six winning ideas each worth £150. These were: Forest Pirate Ship; Forest Football; a Dog Run; Assault Course; Trim Trail; Play Space in the Dark Wood.

The second phase of the process then began in September 2019 and for this we’ve had much more time. This has focused on refining, designing and delivering on the 6 winning ideas. We sent out a call to the children of the six winning teams to see who might be available to join the Forest Big Dish Out After-Schools Club which would meet once a month from September ’19 – June ’20. We ended up with a team of 10 children. This team was joined by a local Youth Worker, a Forest Service Guide, a Circus Performer and Karin Eyben from Garvagh People’s Forest Project. We spent the first couple of sessions building the team and reconnecting to the ideas. This then progressed into exploring, refining, connecting the ideas into a feasible delivery process. This has been guided by the Forest Compass Points which have been developed by the children to ensure that the ideas do not damage the forest.

Our ambition was to work up towards the 6th June for a ‘Children’s Forest Day’ where the young people would showcase their ideas to the community and report back to the voters on how they spent the money. This has obviously been messed up with Covid-19.

Important to also say that the ‘Big Ideas’ were formally presented to the Causeway Coast & Glens Council and the Forest Service.

The young people in Phase 1 participated in their Forest School Tree Groups. In Phase 2 a team of 10 young people representing the 6 Winning Teams came together in an After-Schools Club structure. The facilitation has been coordinated by Karin Eyben.

During Phase 1 each Tree Group was supported by an adult (whether Forest School volunteer or teacher). During Phase 2 the young people and the four adults became one team.

The important dimensions to this project was investing in democracy and citizen engagement in relation to a shared natural asset and space that requires people to understand their role and responsibilities in looking after it. This was a tiny project and tiny drop in the ocean in the context of a local government and NI Forest Service culture which is top down, and ‘expert’ driven.

The lack of time was an obstacle during Phase 1 – particularly around making sure that people, young and old, got what PB was about. We also did not have proper time to ‘screen’ the bid ideas and support the young people develop them up. We compensated for this during Phase 2.  The logistics of coordinating across six primary schools was also difficult although this was greatly eased by the structures and relationships already in place for Forest School. We also had a challenge from a strong local environmentalist who strongly believed that the forest is best served by keeping people away.

We had a reflection session with each school following the Voting Day to get some feedback from the children. Some interesting comments around the Voting Day. For example, the use of props (the Dog Run team brought a cuddly toy dog which according to the children swung many voters); the challenges of some young people rushing around and not listening to the team’s presentations; the importance of 5 votes forcing them to go beyond their friends. That on the whole, the day itself with (luckily) the sun shining, the sense of festivities, food, music and occasion provided comfort to those who lost. We cannot offer any overall evaluation as the project is still ongoing.

Some of the money came from Belfast Festival of Politics and Ideas; some came from the staff of the Community Foundation for NI; and the rest from individual local donations in Garvagh. Ultimate responsibility for how it was spent sat with the Garvagh People’s Forest (Garvagh Development Trust).

- Make sure that everyone is having fun, young and old, throughout the process.

- Be ready for the challenge of adults learning to share or give up power.

- Gratitude and thanks to all who are trying their best within constraints.

- Don’t go for perfection – be amazed by what has been possible. 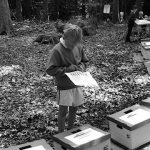 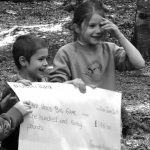 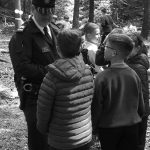 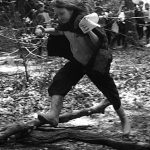