Children and young people at 11 educational centers in Cartagena—all the public centers in the town—have decided how to invest €110 000 that the Cartagena City Council allocated to Participatory Budgets (PBs) in schools and institutes in 2019. Six thousand students from seven primary schools and four secondary schools voted to decide what to do with the budget item assigned for that purpose by the City Council. The students were asked to choose which were the best proposals for improvements to their facilities, from projects they themselves had prepared.

The facilities selected for improvement were air conditioning systems, sports and computer equipment, sound equipment, and musical instruments. To vote, an electoral roll was drawn up at each center and the corresponding polling stations were set up, staffed by the students themselves.

The previous year, the CEIP (Public School for Nursery and Primary Education) Virgen del Carmen and the IES (Institute for Secondary Education) San Isidoro de Los Dolores, participated in a pilot PB project for primary and secondary schools that, in 2019, was extended to all public centers.

The process to initiate PBs in the Educational Centers program started on February 15, 2019. An initial meeting to inform the management teams of all the participating Centers was held in the City Hall, followed by a press conference to report the results.

The structure of our process was as follows:

Phase 1.- Information, dissemination and debate (February 18 to March 26, inclusive). From February 18, City Council technicians visited the centers to publicize the project to the steering committee and teaching staff (until February 28).

From March 1 to 15, in each primary and secondary education center, the steering committee informed teachers and students in order to encourage them to participate.

Phase 2.- Collection of proposals and prioritization.

Proposals by student groups in each center were collected on March 28.

On March 29, a project follow-up meeting with all representatives of all centers took place at IES San Isidoro secondary school.

On April 1, the steering committee and a commission reviewed and selected the proposals.

On April 2, all the proposals were sent to the city council technical staff responsible for Participation.

From April 4 to 10, the city council technicians were allowed visit the centers if they needed to and, finally, from April 2 to 22, the proposals were reviewed and approved by the technicians on the basis of feasibility criteria.

From April 24, the final campaign to publicize the proposals that had been accepted took place. Finally, voting was organized by each center from May 6 to 8.

On May 10, the projects receiving most votes in each center were published.

On May 17, a meeting with representatives from all centers took place in order to evaluate the process.

Around 6000 students had been asked to give their opinion on which improvements should be carried out in their centers, for which the council had allocated €110 000, €10 000 for each center.

Each center published a report on the process and these are available on the city council website (https://presupuestosparticipativos.cartagena.es/centros_educativos.asp).

Link to report (in Spanish): https://presupuestosparticipativos.cartagena.es/gestion/documentos/40276.pdf

Information about projects not available.

Link to report (in Spanish): https://presupuestosparticipativos.cartagena.es/gestion/documentos/40274.pdf

Link to report (in Spanish): https://presupuestosparticipativos.cartagena.es/gestion/documentos/40279.pdf

A closer look to one school

Each center was given the freedom to adapt the process to their own needs and objectives. To offer a closer view of one of them, we focus on the process at CEIP Vicente Medina.

Each center established their own objectives adapted to the process. This school’s goals were:

A student-designed logo was selected following a contest (see images in gallery).

tudents’ proposals were collected and selected taking into account the criteria outlined in class following indications from the city council.

Information on suppliers and prices was sought in order to selection those proposals that would meet the city council’s technical staff’s feasibility criteria.

Billboards were prepared for polling day (see images in gallery).

Finally, the ballot papers were produced and the students organized themselves to fulfill different functions on voting day.

At this school, the education community was informed about the PB project and its implementation in the center was discussed.

After approval, grade 6 students organized themselves to explain everything to the rest of their classmates: “What are participatory budgets and this PB project for schools?”

Children were involved through the process of creating the proposals. Once all the proposals had been received, the committee, made up of students, teachers and the management team, met to analyze them in terms of their feasibility.

Students were also involved in campaigning for the proposals and in the organization of polling day.

The children were participative and motivated to carry out the entire project. Understanding the basis of democratic decision-making and respecting the results of the voting process is a fundamental lesson to learn for their future. It has been quite an experience for them to abandon their individual positions and accept the points of view of different students.

One of the biggest problems they have encountered has been the limited time available since the project, although theorized from the beginning of the course, did not start until the middle of the second quarter. It would have been better to propose it at the very beginning of the course, since the number of activities to be carried out increased and it was necessary to take into account school hours and the demands of the curriculum.

Each school conducted its own evaluation.

In general we would affirm that the process was valued very positively. The calendar was fulfilled according to plan and at all times each student was clear about the current state of the process.

All the students were divided into groups and were assigned useful, clear roles to carry out their work, strengthening group cohesion and getting satisfactory results.

The Cartagena City Council promotes citizen participation through Participatory Budgets in schools. They provided the funding and the school was responsible for making the investment under the supervision of council technical staff.

The fact that each group was monitored and facilitated by a teacher was very positive. Students had a person of reference to put their doubts to and to act as a mediator in conflicts. In addition, it allowed teachers to become more actively involved in the project, becoming aware of it and promoting the cohesion of the school community. 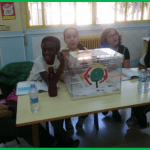 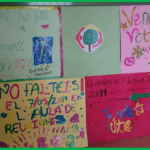 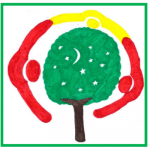 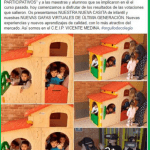 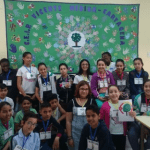 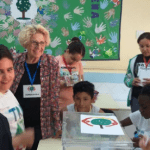 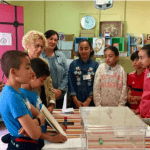